In the fifth and final blog in a series on Interrogating Decentralisation in Africa, Kassa Teshager Alemu – assistant professor at the Ethiopian Civil Service University – uses his research on the role of informal actors in Addis Ababa’s solid waste management system to reflect on the recent Koshe landslide and how a similar disaster can be avoided in the future.

On the 11th of March 2017, there was a massive landslide at the Koshe dumpsite, and piles of waste collapsed onto waste pickers and their homes. Hundreds of waste pickers live in and around the landfill and their livelihood depends on the dumpsite waste resources (about 500-600 waste pickers are believed to work at the landfill every day). The landslide also affected dozens of houses built for rent around Koshe. Many poor people live around the landfill because rentals there are relatively low. In this sudden happening, 115 people died, women and children were the main victims.

There are conflicting reports of what triggered the landslide; while some say it started with the workings of waste pickers, others say it was the bulldozers packing the soil for a biogas plant which is being built there that destabilised the hill.

One thing is sure: the city government’s solid waste management system does not recognise the informal actors who operate and live around Koshe, and there is a case to be made that moves to recognise these workers could have helped avoid the disaster that followed.

Rapid urbanisation, urban migration, and the impact on waste management and collection

Addis Ababa is one of the fastest growing cities in Africa. Its high population growth, rapid urbanisation, rural-urban migration, and a rise in the living standards of its citizens has accelerated the rate of waste generation in the city. Waste collection and disposal is the big challenge for the current city government. In 2003, the then city mayor started reorganising and decentralising the waste management structure. At the early stage of the reform, the city government seemed to recognise and integrate the informal waste pickers operating in the city. However, after a short while informal waste pickers were forced to either formally register with government-affiliated cooperatives or cease being involved in the solid waste management system. Most decided not to register, but to keep on working as informal actors without recognition by the formal system. Meanwhile, the ruling party mobilised unemployed youth to formally establish cooperatives and involve them in solid waste management with questionable success.

Regardless of a lack of recognition, informal waste pickers continue to play a crucial role in the city’s waste management, like elsewhere around the world. Not only are they key players within waste material exchange networks, but also important entrepreneurs: where the state sees ‘waste’ (something to get rid of), informal actors see ‘recycling’ (an opportunity). Large in number and distributed across the city, they often belong to disadvantaged communities, making a living by collecting, sorting and selling waste to the informal and formal recycling industries. 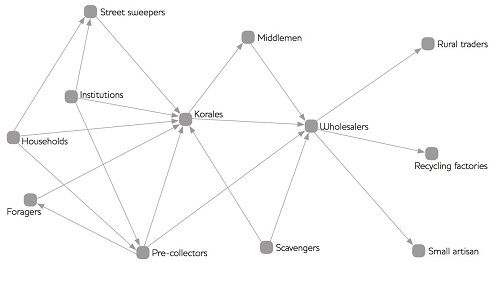 In Addis there are several categories of informal waste pickers, the most common being koralés (itinerant scrap buyers), foragers (collecting different kinds of materials from municipal containers, rubbish bins and streets), and scavengers (collecting different kinds of materials at the municipal landfill site). They collect solid waste materials such as plastics, metals and glasses from households, institutions, municipal containers and dumpsites, and sell them to either koralés or directly to wholesalers at the central market of the city. The wholesalers then supply the waste to the recycling industries, small artisans, and rural traders. Most of the poorer informal pickers live around Koshe dumpsite.

Koshe (which in Amharic means dirty) is the only dumpsite in the city. Established 50 years ago, it reached its full capacity many years ago. The city government tried to close Koshe and move its waste operations to a new location called the Sendafa Sanitary Landfill. The government plan was to build a modern dumpsite in Sendafa, a separate town and woreda (district) 37 km from Addis, with recycling facilities. However, the people living near the new site protested and forced the city authorities to reverse their decision.

When the city government decided to relocate the landfill to Sendafa area, a new project was initiated in Koshe in 2013 to turn part of the waste into a source of clean energy. As part of this initiative, a biogas plant is being built on top of Koshe with the aim of not only producing clean energy, but also to produce carbon credits to sell in the world market. Money from these sales was to be put forward turning Koshe into a park, while creating jobs for the waste pickers. Despite the efforts, however, the city government didn’t succeed in relocating the dumpsite and the initiated project was not implemented as planned. Nor were the informal waste pickers involved in the process. While this would have not necessarily prevented the landslide (the hazard) from happening, its impact on the (vulnerability of the) people living and working in Koshe would have been far less and maybe even avoided the landslide triggering the disaster.

It is critical that the city government now recognises that by acknowledging and accepting the key role of the informal solid waste collectors and recyclers, they can not only optimise waste management – as informal actors can collect, sort, transport, dispose, and recycle waste at less cost than the formal system – but also prevent similar disasters from happening in the future.