Uhuru strikes at the heart of illicit financial flows

Uhuru strikes at the heart of illicit financial flows

A surprise masterstroke against graft doled out on the banks of Enkare Narok by President Uhuru Kenyatta’s government yesterday struck at the heart of Kenya’s illicit financial flow system and triggered a wave of panic.

The notice to withdraw the old Sh1,000 bank note announced by Central Bank Governor Patrick Njoroge was last evening hailed by economists, pundits, and observers as a brilliant and bold move in the fight against entrenched graft. Mr. Njoroge was accorded the honour of addressing the country after the Commander-in-Chief had spoken. He said withdrawal of the Sh1,000 note was informed by “grave concern” that the notes were being used for illicit financial flows. The CBK Governor, however, spared the old notes – Sh500, Sh200, Sh100, and Sh50 which will continue to circulate alongside the new notes unveiled by President Kenyatta at the same event.

“To deal conclusively with these concerns, all the older one thousand shillings series shall be withdrawn. By a Gazette Notice dated May 31, all persons have until October 1, to exchange those notes, after which the older one thousand shillings banknotes will cease to be legal tender,” he said. A 2018 report by the Partnership for African Social and Governance Research (PASGR) claimed that since 2011, Kenya has been losing an average Sh40 billion through illicit financial flows. The study said there was credible evidence showing that “illicit financial flows is a serious development constraint in Kenya.”According to ANC leader Musalia Mudavadi, the move was long overdue in view of the country’s unrewarding struggle in taming runaway graft. He said the more CBK tightened the banking rules, the cleverer the corrupt became… until now!“There will be a rush for those with large unexplained cash to introduce it into the system, but this will be easily noticed. If the government is keen it will then get those who had plundered resources and hid the cash,” said Mudavadi.

He said there was a likely scenario where some people will even try to buy dollars or buy property at whatever value as they try to introduce the hidden cash into the banking system. He asked the government to scale it further by encouraging cashless transactions. British High Commissioner Nic Hailey described the announcement as great news. “Anyone who has been stashing proceeds of corruption in cash, to avoid oversight, will have to explain where their wealth came from.” “It is targeting the big thieves. The billions or even tens of billions. Also, an exchange is a deposit. Banks will have to report to CBK and other authorities any exchanges above a certain threshold. Will deter those with lots of 1000s to go,” tweeted Mohamed Weliye, a banker. Wehliye had last year predicted that “de-monetisation” would be the next phase of war on corruption and that it would economically shock and awe the corrupt: “Withdraw the Sh1,000 note from circulation to target unaccounted for wealth. Replace the genuine ones with Sh500s over a 60 day period. Let’s see who will be swimming naked.”Dr. Samwel Nyandemo a senior lecturer at the University of Nairobi claimed there was about Sh600 billion missing in circulation. He said the CBK move would help to mop up excess money held in private hands starving the country of the cash.“In the next few days, we are likely to see high expenditure and especially in the property purchases, this will drastically impact on the economic growth through consumption and not in investments,” said Nyandemo. He said the move was a brilliant way of fighting corruption given that those who will rush to bank the money will easily expose themselves to the authorities. 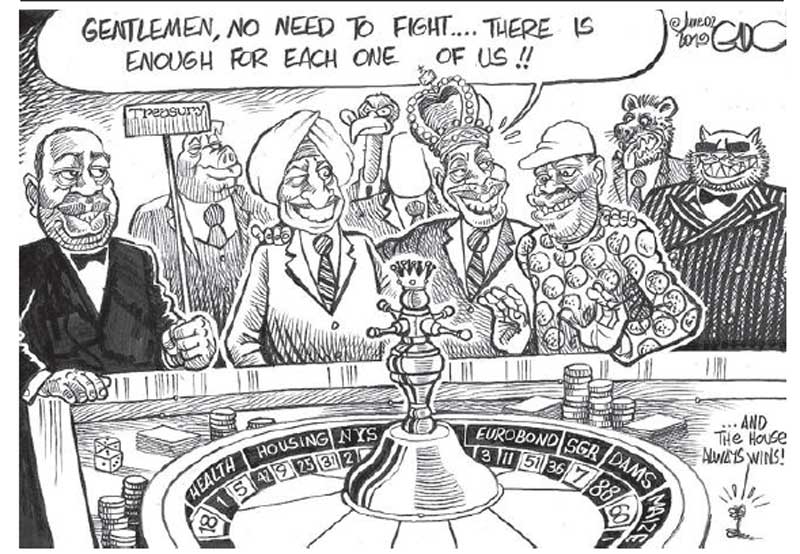 “The government should now check the itax to compare the consumption of some individuals with how much they had declared in their accounts,” said Nyandemo. John Githongo said there have always been people keeping cash in their houses and the move will easily rattle them.“This process was tried in India, it is not, however, clear whether if had successes,” said Githongo. Senate Minority Whip Mutula Kilonzo Jnr hoped the move will rid the country of black money. Jared Okello (Nyando) said the noose had further tightened on the corrupt and that it will have a positive ripple effect on governance generally.“What Uhuru has essentially done, especially with the nature of investigations and knowing that corruption fights back, is to put these people on the spot. He knows a third of these illicit monies go to buy justice,” he said. Igembe North MP Maoka Maore, who blew the Anglo Leasing whistle, described the move as “monumental.” He said it was practically impossible for people to clean their billions within the short grace period accorded. “If you have Sh8 billion in your house, you are to clean Sh33 million per day through the bank. You can imagine the headache such people will go through,” he said. Njoroge who handed over the new notes Uhuru said the notes were smaller in size, wallet-friendly and easily detectable in texture for the visually impaired.

This has been re-posted from https://www.standardmedia.co.ke/article/2001328134/uhuru-strikes-at-the-heart-of-graft

We Need To Professionalise Teaching At Universities — ...