The Kenya Revenue Authority’s granting of five-year tax exemption was a major milestone for PASGR in 2016. In a year marked by bold attempts to execute projects efficiently and effectively, the exemption starting October 31 was a major achievement.

“The concession ensures that whatever funding we get will not be subject to income tax,” Finance and Administration Director Anna Otiato says. Renewal is subject to KRA audit, similar to the one preceding grant of the status. The exemption does not cover Pay-As-You-Earn (PAYE) taxes.

Exemption was preceded by rigorous checks, including a visit to some MRPP universities to confirm existence of PASGR partner activities, lecturers, students and equipment and that Kenyans were actually benefiting.

PASGR stepped up efforts to make the most of its financial and other resources even as the UK’s Department for International Development (DFID) footed 87 per cent of the budget. According to Otiato, 32 per cent of the total 2016 funding went to research, 29 per cent to PDT, 24 per cent to HEP, and 15 per cent to core administration. 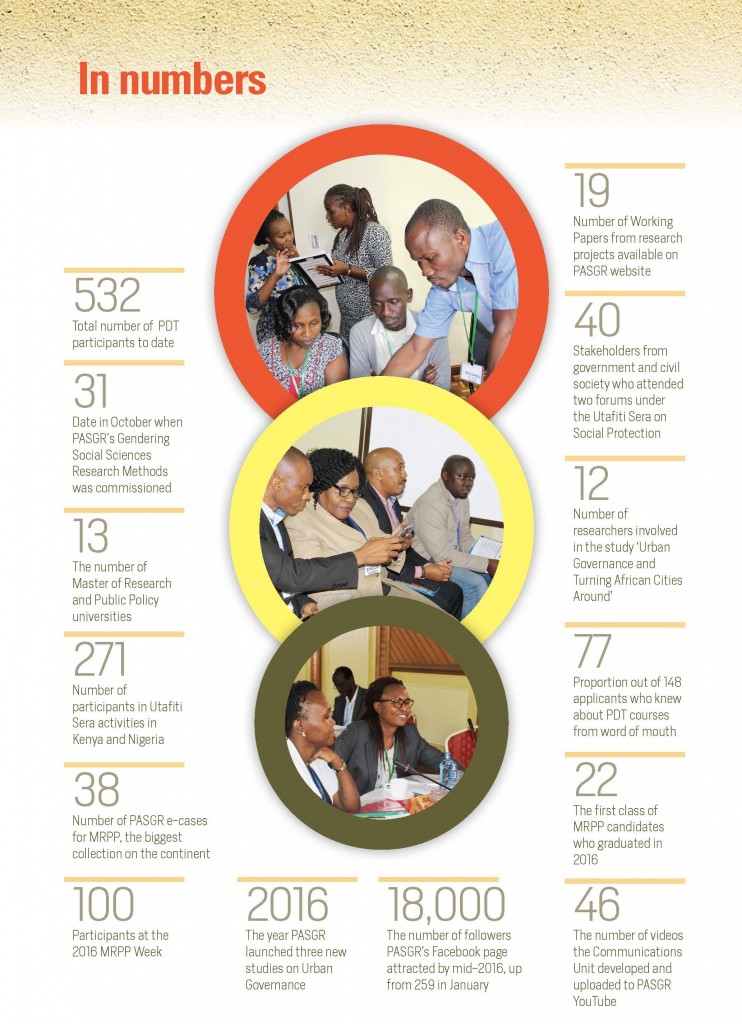 Additional funding came from the Open Society Foundation and the Carnegie Corporation of New York, which supported Professional Development & Training activities. Carnegie provided a grant for strengthening social science research training in Africa, one of the outputs being to train a number of early-career African researchers on multi-methods research skills.

The Institute of Development Studies (IDS) Sussex, and the African Study Centre in Leiden, The Netherlands, also offered support. The
latter funded Utafiti Sera projects in Kenya and Nigeria.

A newcomer, the International Network for the Availability of Scientific Publications (INASP), funded a gender sensitisation workshop. The PDT programme realised significant savings for PASGR when it redesigned a three-day MRPP module into a customised one-day delivery as PASGR, stepped up efforts to run its courses in more affordable facilities without sacrificing quality.

Despite spirited attempts to achieve value for money, it may take a while to register anticipated gains when increased numbers of participants foot full costs, including travel, accommodation and tuition costs. Most applicants request sponsorship. “But we are hopeful that we will get there because the quality of training is good and there is demand for it,” Otiato says.

Social protection is not an ivory tower theory; ...