Africa is hitting new heights in terms of its democratic process, macro-economic growth, and constitutional commitment to social welfare. However, the continent lacks the financial and institutional capacity – and in some places the political will – to honour its pledges to the poor and vulnerable. About 90% of all citizens, many of whom are desperately poor and vulnerable, do not have access to state support. While international attention has searched for remedies to state shortfalls, the poor themselves have taken a different route.

They have improvised, organized, delivered, and governed their own collective social protection services, in various shapes and forms, often below the official radar. Based on empirical studies in 30 districts in Ethiopia, Ghana, Kenya, Senegal, Tanzania, and Uganda, the book ‘Non-State Social Protection and Services in Africa’ illustrates how – in the context of limited statehood – localised self-governance by small, informal, and community-level organizations has delivered more social protection to more needy people than all state programmes combined. 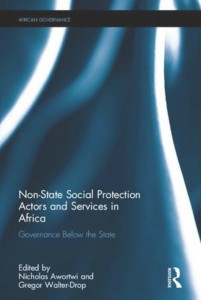 The greatest irony is this: self-help systems are denied any state support, and even recognition, because they do not conform to modern systems of accountability. Yet their traditional, informal, and unconventional character is precisely why they work. They may not be perfect, but their highly-localized and homespun groupings and methods make them more accountable, not less. They are probably a best fit. They could be the primary channel for government support, using meagre state resources more efficiently and effectively than the state itself.

The greatest danger is this: if states try to reform community-based organizations (CBOs) through regulation, they may dissent, disobey or disband. However, if they are encouraged (and enabled) to conform voluntarily through skills support and practical incentives, then no ‘enforcement’ will be necessary. Their traditional practices persist because they work; they deliver the optimum cost-benefit mix with the skills, time, materials, and funds available.

The studies in this book draw attention to the need for an all-encompassing social protection policy, beyond the current donor-funded and state-run cash transfer programmes, which cover only a tiny fraction of the poor. They show policymakers the potential of community-based mechanisms for expanding social protection programmes in Africa affordably. Government welfare departments, struggling with inadequate human resources, funding constraints, and an exponential increase in the number of those in need, have a potential ally in CBOs.

Social protection is not an ivory tower theory; it is a grassroots reality. And that is the reality in which informal groups live. Self-organized social protection services in areas of limited statehood help explain how – in the absence of government – governance is possible. Even good governance! Below the state, people actively seek to govern themselves on their own collective terms. Their organizations and membership behaviour are structured by the flow of information, resources, and accountability. They axiomatically work to be the best they can be (which is not common in state institutions).

Great care should be taken not to undermine CBOs’ informal governance methods, which make them uniquely capable of knowing and responding to community and member needs with extreme accuracy and cost efficiency. Any edict that imposes rigid conventional governance mechanisms on self-help groups could be destructive, with significant political and welfare risks. The CBO system is not broken; it does not need to be fixed. It is the rest of the national social protection system that needs to change – in its perception of informal governance mechanisms, in its respect for the essential importance of trust traditions, and in its willingness to engage CBOs, supportively, on a case-by-case basis at the community level.

Poor-to-poor financing of social protection is a reminder that a successful community may not necessarily be dominated by worthy individuals nor a benevolent state, but by people who see themselves in each other’s eyes. Left to their own devices, the poor will organize, connect to one another, and take coordinated action. The social contract between the state and the poor is replaced by a functional contract between people themselves. Just as bureaucratic institutions try to control human behaviour to ensure state goals, so do mutual trust, peer pressure, and informal mechanisms enable small organizations to organize services for their members in an orderly manner, without the support – or the encumbrance – of the state. At the community level, if the state is absent, there is no anarchy; there is merely governance without the state.